The Voneus National Village Cup is the grassroots competition that, for 50 years, has embodied every village cricketer’s dream to play at Lords. The dream is still alive at Aston Rowant after a crushing victory in The Oxfordshire Quarter Finals at home to Tiddington last Sunday.

The Oxfordshire Quarter-Final waited for the band of merry ARCC men. With an almost full washout of games on the day before, everyone was eager for the game vs our local rivals from up the road (Tiddington). The team was a slight change on last the game (Barras, Hammersley, Mason all in, with others busy and working). The kettle was on and the coffees being drunk as Tiddington arrived and we set about a much less muscular destructive warm up than when Adam Muttitt was in charge. Hayden Rossouw resumed his role as coach for the day and set up without a doubt the most complicated but once walked through most affective fielding drill. Tim Morgan, for the first time in what must be a decade, lost the toss and Tiddington in what can only be described as a negative move put us in to bat. The word negative being how you’d describe our visitors on the way they approached their day out at Butts Way. Right from the off, it proved to be a bad choice, Morgan and Sasha Barras setting to building us a fantastic platform when the first wicket fell in the 14th over leaving us 82/1. A slow period and a couple of wickets and we slipped to 97/3 in the 20th over, but that left Will Hammersley (pictured) and Thad Cooper at the crease and this mixture of youth and well even more youth took the game away from Tiddington. Hammersley playing his usual 360 degree shots and Thad playing his usual cover drives through mid-wicket and sweeps over long off propelled us to 191/4 in the 34th over. Some clean hitting from Karl Penhale, some rather not so clean hitting from Ben Porter and some missing the ball completely from Muttitt left us on 229 from our 40 overs.

A half decent first half and a total set. After some stirring half time words from Uncle Dave, we knew what we had to do. “Restrict, restrict, restrict” was the aim of the second innings. We started that off fantastically, with the ever-reliable Penhale and Dom Whatman picking up a wicket apiece and leaving Tiddington 20/2 off 8. Muttitt and Casper Mason settled in very nicely as first and second change and we once again had the curious case of batters being negative and batting for their average as Tiddington crept up to 102/2 in the 30th over showing zero intent to win the game and needing 130 odd in 10 overs never seemed likely, but Tiddington thought they might be able to take on our 5th bowling option, Porter. How wrong they were. Porter bowled beautifully keeping the pressure on and courtesy of some ‘tidy’ fielding at deep square by Adam “Jonty Rhodes” Muttitt, only went for one boundary in his 8 overs. Mason returned for his second at the other end and cleaned up two of their middle order and he and Porter finished with two wickets each as Tiddington folded to 164/7 off their 40 overs.

A brilliant display in the field and great to get the win for all those who turned up to support. Next game is Minster Lovell, thankfully at home on Sunday May 23rd. It would be great to get a nice bit of support for the Oxfordshire Semi-final, knowing Covid-19 restrictions have lifted…

Whisky of the game – Jameson Irish Whisky. (Burnt like a flaming sambuca. Lots of moaning) 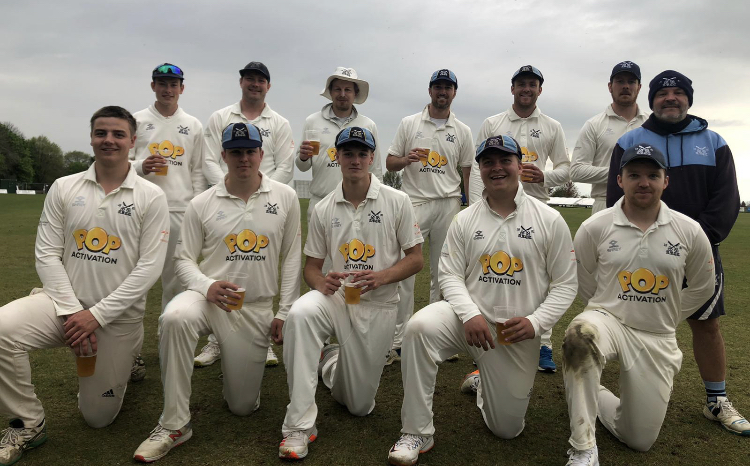