Aston u11s put on a memorable display away at Princes Risborough in a one sided contest running out winners by 148 runs. Batting first Aston racked up 355 runs (start at 200) making the most of some average bowling with fine displays again from Lewis North, Charlie Basden, Jude Coates, Connor Rogan and Jonty Atkins with most other batsmen also in the runs.

The difference in class was then fully displayed in the bowling and fielding with Aston’s accurate bowling meaning wickets fell virtually every over as Risborough failed to reach 200. The highlights of the performance were Arlo’s ever improving off spin which yielded 7 wickets for 10 runs in 4 accurate overs including the first hat trick we have seen for some time in junior cricket. In addition an amazing catch by Charlie Basden at deep square leg which surprised both the batsmen and umpires and bar Arlo’s heroics would have been the champagne moment of the season so far!

With only a couple of games left its been a very encouraging year for the U11s who will go into next year full of confidence and experience with a good chance in all competitions. 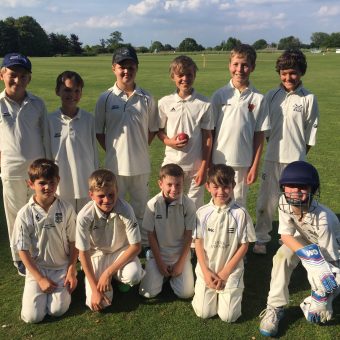 On a glorious evening at ARCC our U11s got their first win of the season after an excellent all round display.

Batting first and starting on 200 Aston amazed 287 despite losing 8 wickets which in this form of cricket cost -6 runs each time.
The batting performance was led by Jacob Eaton 21 not out and Hector Harvey who despite getting out once managed to hit four 4s in his innings. All of the other batsmen chipped in and particularly pleasing was the running between the wickets and quick singles which meant the scored board kept ticking along.

With a good score on the board Wendover got off to a positive start however the nagging accuracy and movement of Joe Davies 1-22 and Samuel Growcutt 2-3 pegged Wendover back aided by some sharp fielding and wicketkeeping by Connor Rogan. With Arlo Hyman and Jude also picking up regular wickets Wendover were never able to challenge the Aston total and it left Hector to get 3 wickets in one over with his pace to finish Wendover off. Wendover finished on 234-10 meaning victory by 53 runs for an Aston U11 side who are continually improving and have probably been unlucky not to win before now.

Another week for the U11s and another tough game against Horspath produced a closely fought contest. After being inserted Aston got off to a positive start with Connor Rogan dispatching their U11 county bowler for a one bounce four straight over his head. The bowler soon got his revenge though sneeking one under Conners bat to leave us one down. However Samuel Growcutt was in fine form pulling the ball nicely off his legs and striking cleanly to the onside helping us go along at 4 an over for the 1st 10 overs. Samuel was able supported by Lewis North and Jacob Eaton before he retired for an excellent 30* made agains the best attack in the league. With wickets falling steady through no other batsman really got going apart from Charlie Basden who looked in good form before going for a suicidal single and being run out. With the Scoreboard still ticking over it was left to Joe Davies under strict instruction from the coach to stay in and see us to a good total. He succeeded and we finished on a respectable 96 off 20 overs against a team of mainly County u11 players.

At halftime we thought if we could apply pressure and take wickets we had a good chance. The bowlers certainly delivered the pressure with Joe Davies and Jacob Eaton delivering accurate and testing opening spells against some good Horspath openers keeping runs at less than 4 per over. They were well backed up by Samuel Gowcutt, Josh Boddy, Lewis North and Charlie Basden who also bowled well as we continued to pressurise but despite a few chances we only managed the one wicket meaning Horspath always had wickets in hand. At 14 overs gone the game was still in the balance but some big blows meant Horspath were able to close the game out with a couple of overs to spare. Despite losing it was yet another great display for our young Aston U11s side and a performance that also impressed the Horspath management. On to the next game away against Tiddington on Sunday 11th June.

ARCC U11s got there season underway with a closely fought contest at home against a strong Thame side.

Fielding first Aston made early inroads thanks to fine opening spells from Hector Harvey (1 -12), Jacob Eaton (2-15) and Joe Davies (1-8) reducing Thame to 25 for 4 including a fine catch by Aimee Diab. However Thame rallied and increased the scoring rate despite some fine fielding from the Aston team on a bitterly cold evening. In particular Connor Rogan who had a great evening behind the stumps and Arlo Hyman, Felix Mckenzie and Charlie Basden who had to  contend with most of the hard hit balls at third man and square leg. With two Thame batsmen reaching 25 retired they managed to reach 101 for 4 off their 20 overs. In general it was a good display from the U11s with no too many  wides considering it was the first match for many with a hard ball. At half time we were happy to chase 101 as Thame were fielding most players a year older than our own.

In reply our openers Joe Davies and Connor Rogan found it tough going against a quick Thame opening pair but battled through with Connor going on to score an excellent 25 retired. With Joe being run out in the 7th over with the score on 23 it was  up to the new batsmen to put the foot on the gas. With 60 needed off the last 10 overs Lewis and Connor began to increase the scoring rate supported superbly by quick fire runs from Jude Coates 17 and Hayden Foster 8 once Conner had retired. With accurate Thame bowling it was left to Jacob Eaton and Lewis North who remained unbeaten to score 8 off the last over to win the match. However despite a couple of fine shots and running between the wickets we only managed 5 runs leaving us 3 runs short of victory.

All in all an excellent match to watch to get the season underway and one that the u11s will no doubt learn from. On to the next match…