On a gorgeous evening ARCC U17’s season got underway with an away match at Shipton.

After losing the toss Shipton elected to bat on a very dry rock hard pitch with very short boundaries! Opening bowlers Caspar Mason and Jamie Revill bowled a tight line and it wasn’t long before Jamie had bowled both openers leaving the home side on 20 for 2 from 5 overs. Captain Oli Shaw changed the bowlers and brought on some spin at both ends with Ben Porter and James Coles. With the batsmen’s eyes lighting up thinking it was time to go after the bowling wickets began to tumble! Ben picked a wicket with his first over and followed this by 3 further wickets in his 3rd over with James also getting in the act taking a wicket. In the middle of this there was a run out which left Shipton reeling on 54 for 8 from 12 of their allocated 20 overs. Enter Sam Chown who bowled the next over and bowled out both of their tail-enders to leave Shipton all out for 60 runs.

In reply openers James and Oli got things off to a mixed start with Oli being caught out for 1 then Carrick Dunbar joined James in the middle and after a few wides and boundaries the score had moved onto 17 from the first over! The pair batted sensibly and took advantage of some loose bowling until James was caught out for 28 with the scores level!

Toby Francis came in to face the next ball which was signalled wide and the end of the match, Carrick was left on 20 not out.

Many thanks to Andy Francis for scoring 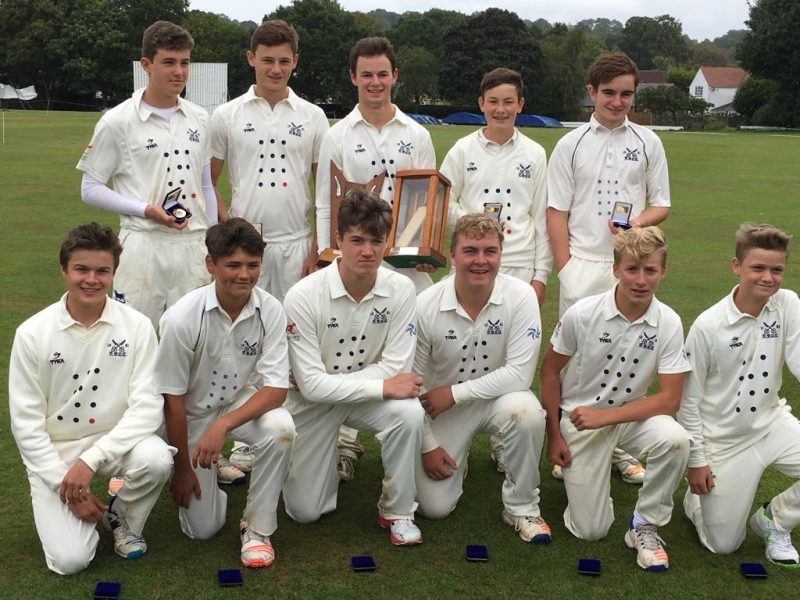 With rain forecast for most of the afternoon both semi-final matches were reduced to T15’s rather than T20’s! Aston had been drawn against Shipton in the semi and after winning the toss decided to bowl first.

Things couldn’t have got off to a better start when Shipton’s big hitter Charlie Miller was bowled by Casper with the score on 12. Wickets fell at regular intervals and Shipton reached 68 for 5 from their 15 overs. Tom Brine and David White both picked up 2 wickets apiece and Caspar 1 wicket.
With a modest target to chase openers Oli Shaw and Rory Wilson flew out of the blocks and made the most of the fielding restrictions. After 3 overs they had moved the score onto 40 and 2 overs later with the score on 56 Rory was caught for 22. Jamie Revill joined Oli at the crease and Oli was soon out for a 31 with the score on 61. Tom Brine was next in and the pair got Rowant over the line with 7 overs to spare.

Challow and Childrey had knocked out Oxford in the other semi-final and we faced them in the final.

Rowant won the toss and elected to bowl first in a match reduced to a 10 over slog with each bowler only allowed to bowl 2 overs each. Challow lost a wicket in the first over after Casper bowled their opener. They then accelerated the scoring racing along to 32 from 3 overs until Ben Porter got the break through. Wickets began to fall at regular intervals and Challow reached 67 for 8 from their 10 overs after some great bowling in difficult decisions. Tom Brine picked up 3 wickets, David White picked up another 2 and 1 wicket each for Alex Chapman, Caspar Mason and Ben Porter.

In reply Oli and Rory batted the same way as the semi-final, both batsman played their shots and moved the score onto 36 from 3 overs when Rory was out caught for a quick-fire 20. Tom joined Oli at the crease and next over Oli was caught out for 14 with the score on 38 for 2 from 4 overs. Jamie joined Tom and pair again saw the team over the line with almost 4 overs spare. Jamie ended on 21no while Tom ended on 12no.

Both matches the team batted, bowled and fielded very well, well done to the whole team.

115 run partnership by Brine and Coles see of Bicester

Our last U17 group game was an away trip to Bicester, knowing a win must be secured if we are to progress to the finals day next month. After losing the toss and asked to bat first in the rain things started well, with Oli Shaw scoring 10 runs from the first over and then the wheels fell off!

11 for 1 from 1 over soon went to 38 for 5 from 8 overs. Quick bowling and a very bouncy pitch along with some poor shots did the damage. The innings was then steadied by an excellent partnership from Tom Brine and James Coles. Both batsmen saw off the opening pair of bowlers and then started to play their shots and accelerated the scoring perfectly. The pair put on 115 together with 94 runs coming from the last 9 overs. James was finally out, after standing on his own wicket, for a splendid 61 while Tom was left on 54 not out. Aston ended their innings on 155 for 6.

With Bicester needing almost 8 an over, things were always to going to be tough for them. It was David White who made the break through after a catch by Colesy fielding in the covers. Bicester then started to swing the bat and with the help from some poor catching moved their score to 61 when their big hitter was bowled by Hamish Robertson. Hamish also took the next wicket as well, removing their opener leaving Bicester on 88 for 3. With Bicester’s big hitters all out the others soon followed. Sam Chown and Jamie Revill both picked up 3 wickets each which included a good running catch by Caspar Mason to leave Bicester all out for 107.

We now wait to hear if we progress to the finals day which is to be held at Horspath on 3rd September.

Another comfortable win for the U17’s

The U17’s played their 3rd game of the season on Monday 31st July 2017, knowing anything but a win against Twyford would end their chances of reaching finals day.
After losing the toss Twyford decided to bat first and opening bowlers Tom Brine and Caspar Mason soon got stuck in, with both bowlers taking a wicket apiece to leave Twyford on 16 for 2. Twyford steadied their innings and moved their score onto 50 when Hamish bowled their number 3. Aston continued to bowl tight and with good fielding made scoring runs difficult. Caspar came back on at the end again and bowled full and too quick for their batsman and picked up another 3 wickets in 2 overs to end with splendid figures of 4 overs 4 for 7. Twyford ended their innings on 85 for 6.

With a low score needed for a win, openers Toby Simon and Oli Shaw set to chase down the score. They scored freely and batted like they wanted to end the game early and after 6 overs had already moved the score onto 49. Next over Toby was caught for 22. This brought Rory Wilson to the crease and Oli continued to despatch any loose ball to the boundary until Rory was bowled behind his legs to leave Aston on 61 for 2 from 8 overs. Oli was joined by James Coles and somehow Oli seemed to keep the strike for the rest of the game which allowed Oli to get an excellent 50. He ended on 56 NO while James was left still on zero! Not sure how that happened as the pair put on the last 25 runs in 3 overs leaving Aston Rowant winners by 8 wickets.

Many thanks to Matt Chown for umpiring and Steve for scoring.
Nigel Revill

Rory Wilson gets the U17’s over the line

After last weeks disappointment a much better performance was needed if we were to beat Horspath.

After losing the toss Horspath decided to bat first. David White opened the bowling with the skipper Tom Brine and it soon became apparent that scoring runs wasn’t going to be easy. After 10 overs Horspath had moved onto 36 for 0 after David and Will Senior both ended up with the same figures 4 overs, 0 for 15. A double bowling change took place with Ben Porter and Hamish Robertson bowling spin at both ends and looking to push on Horspath started to lose some wickets. Ben bowled well and ended with figures 4 overs 2 wickets for 7 runs while Hamish ended with 1 for 17 from his 4 overs. David White was involved in a run out after hitting the stumps with a direct hit and with Sam Chown bowling 3 good overs at the end and in the process taking 2 wickets for 9 runs Horspath ended on 68 for 6 from their 20 overs. This was a much better bowling and fielding performance.

Thinking this was going to be an easy total to chase down openers Oli Shaw and Toby Simon set about their job. After Oli hit two quick 4’s and then was bowled with the score on 16 and then the mini collapse started. Toby was run out for 2, Jamie Revill was next out caught for 1 and Ollie Robertson soon followed for 3 which left Aston Rowant struggling on 26 for 4 from 8 overs. Tom and Rory Wilson steadied the innings, both batsman running well taking some quick singles and keeping the scoreboard ticking over the pair moved the score onto 52 when Tom was caught for 14. Will came in next to partner Rory and they got the team over the line with almost 5 overs to spare. Rory ended on 27 NO and Will 1.

Aston Rowant U17 started their season against Oxford. After winning the toss Tom Brine elected to bowl first. After a very good opening spell by David White (4 overs 1 for 12) Oxford reached 47 from their first 10 overs for the loss of 1 wicket. Oxford batted very well in their next 10 overs and accelerated their scoring and despite Hamish Robertson and Tom both getting a wicket apiece and a run out by David White, Oxford ended their innings on 144.

In reply Aston didn’t start well. Rory Wilson and Tom were both out within the first 2 overs without troubling the scorers and not long after Will Senior (4) and Jamie Revill (7) were also out leaving Aston on 39 for 4 from 10 overs. Opening batsman Toby Simon was still at the crease and holding the innings together. Joe Chown joined him in the middle and the pair had moved the score onto 60 when Joe was bowled for 14. Ollie Robertson was next in and with the required run rate over 12 runs an over both batsmen hit much needed 4’s. Toby was finally out for a very good 42 with the score on 77. With the run rate getting even higher Aston lost another quick wicket when David was bowled for 3. Hamish joined his brother at the crease and the pair put on 34 quick fire runs until Ollie was bowled for 21. Hamish was out for 19 in the last over leaving Sam Chown 5 NO and Toby Francis on 1 NO.

Many thanks for Steve for umpiring and Jack for scoring.